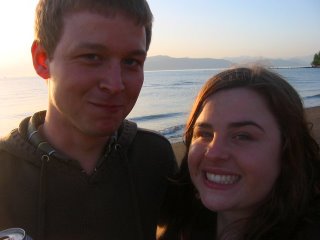 I have been staring at photos of the trips I went on over the past year. It's been a good run. Singapore & Thailand, training across Canada to Toronto & Montreal, and Sweden. Looks like I'll be taking the winter train from Vancouver to Halifax over Christmas break and spending a week in Cape Breton! Quite a lot of travel in one year. I'm lucky, but it makes home seem uneventful, even though I live in such a magical place. I suppose I should be exploring the adventures to be had in Vancouver. I'll start tomorrow. Obviously this picture is old because Jonte is in it and he hasn't lived in Canada since April. But check out how pretty wreck beach is in April. Just an example of the little gems to be found in Vancouver.

Yesterday I went to Zulu records to buy album leaf tickets with Trent & Vanessa. We ran into Marko. It was funny and pleasant that all of us knew him separately.

Tried out a new church last night. Really close to my house and lots of young people. I thought it was great because the worship wasn't done particularly well, the service was run in an awkward, semi-unorganized fashion but it was so sincere and it was clear that it was untrained normal people who were just doing their part to help out. It made me smile and never want to leave.

Here are some good links for today:
my friend luke Marvin is really funny
In the US there are more tvs than people
Bill Clinton is delightful in so many ways
New colonoscopy robot uses snail technology to surf on mucus.

the swedish word if the day is läsning which may or may not mean reading...